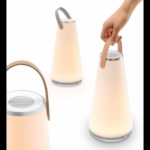 We are in love with the way the Museum of Holon is describing our UMA!
“An unprecedented fusion of the ancient and the innovative with 360° sound and light: “UMA” represents an evolution of the traditional lantern, as it incorporates a portable Bluetooth speaker. Its refined, essential form is an abstraction of the archetypal lantern in use before electricity and one that plays on an idea of universality rather than making specific reference to local cultures. Its warm LED light, regulated by dimmer, whilst an ironic statement on its function and the presence of a flame, is still effective across both intimate and social spaces”.

We use cookies to ensure that we give you the best experience on our website and to ensure that everything works properly for you. If you continue to use this site we will assume that you are happy to accept our cookie policy.AcceptPrivacy Policy